Skip to content
23 July 2013 ~ Jeremy B. Blevins ~ Leave a comment
I spent the past month or so watching the complete series of Jeeves and Wooster on Hulu, and I proudly proclaim that my favorite character was Sir Roderick Spode, 7th Earl of Sidcup.

Nevermind the fact that the character was patterned after Sir Oswald Ernald Mosley; Lord Sidcup is an inspiration to all would-be benevolent meglomaniacs who want to make the world a better place. Unlike Bertie Wooster, that useless fop, Spode held himself with dignity and honor (except when Wooster was blackmailing him with the mere mention of “Eulalie”) and sought to restore national pride in Britain. He even almost let his civic pride and duty to nation overcome him when he nearly cast aside his place amongst the Lords to run for Parliament, only through the manipulations of Jeeves (for the benefit of Wooster)  to be pulled back to his senses.

First, his vision. He knew what he wanted and worked toward achieving it. Before his elevation to the peerage, he sought out influential friends (Sir Watkyn Bassett) and established a source of income that allowed him the freedom to think on such noble causes such as British-made bicycles and umbrellas for all citizens.

Second, his influence. The Black Shorts were devoted to the cause of Spode. They donned the uniform, attended the rallies, and even fought the Communists in defense of their great leader. Granted, their membership was mainly young unmarried men in need of a hobby, and older men whose wives determined they needed a hobby.

Finally, his determination. As evidenced in the “Eulalie” fiasco, Spode was willing to do what it took to see himself reach the success that he desired. Any man who could design women’s underwear AND lead a small army of fascists is a true man indeed.

So to all my fellow Walter Mittys out there, seeking a resolute and determined role model, let us learn from Roderick Spode and keep our heads high, even when the poo comes raining down.

In response to the question below, there is only one tool you need to work on computers: a hammer.

Ask Slashdot: Server Room Toolbox?: jandersen writes “I am the system manager in charge of a smallish server room (~50 servers, most in racks), and I am going to buy a set of tools; but first I want to hear what other people think would be a good idea. Certainly a range of good quality screwdrivers — slotted, Phillips, Pozidriv, Torx. But what else? Tape measure? Spirit level (for aligning the racks)? Any meters or cable testers? A wood lathe? I can probably get away with a budget of a few hundred GBP, but there ought to be some mileage in that.”

Read more of this story at Slashdot.

Not just a hammer, a big hammer. One that gets the job done in one swing. Like this one. 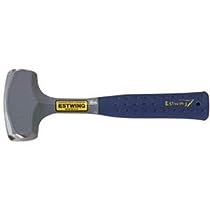 All kidding aside, my selection of server room tools can be found here. Most servers are designed to require few, if any, tools for service, so most of what I think is essential is for cabling and such.

Not only can you watch Dr. Who on BBC America, those of us without cable or satellite can stream it online via Amazon. Maybe it’s the hair… or possibly the bow tie (bow ties are cool, by the way) that makes this week’s Man of the Week, Matt Smith worthy of the title.

But, while the hair and the bow tie are certainly enviable, Smith’s appeal has mostly to do with the sonic screwdriver (that is not a euphemism). That’s right, if you hadn’t already guessed by now, Chubstr HQ is filled with Whovians. So, on the heels of the latest season premiere this weekend, we give a tip of the hat to the current Doctor.

The latest season of Doctor Who premiered with a bang—and a lot of Daleks—Saturday night on BBC America. We’ve been gearing up this season for awhile now, but we’re still not sure we’re fully prepared for the inevitable as season 7 promises, according to Smith, “a gut wrenching, heart wrenching,” goodbye to the Ponds (the Doctor’s latest companions).

Though heartbreak is inevitable, we’ve also been promised dinosaurs, weeping angels, a trip to New York, and of course, more Daleks. You can catch new episodes of Doctor Who each week on BBC America (check your local listings for times), and if you’re not yet a Whovian, there’s no better time than the present to hop on board.

As always, if you have suggestions for men you’d like to see featured in Man of the Week, be sure to let us know on our Facebook page.
(Photos Courtesy: The Mary Sue and Fanpop)
The post Chubstr Man of the Week: Matt Smith appeared first on Chubstr.

23 August 20127 August 2014 ~ Jeremy B. Blevins ~ Leave a comment
This post on Slashdot emboldened me to get the tea spill out of my own keyboard that I love and cherish:

Logitech Releases Washable Keyboard: MrSeb writes “Logitech has released its first washable keyboard. We’re not just talking about ‘splash proof’ either — you can take the K310, immerse it in up to 30cm of water (12in), and give it a good scrub. The only limitation is you can only use standard washing up liquid — oh, and Logitech says you should try to keep the USB connector out of the water, too. Once you’ve washed the keyboard, simply leave it to dry. The user guide says it takes eight hours to air dry, and that you shouldn’t use a hair dryer. There are actually drainage holes on the backside of the K310, to help speed things along. This isn’t the first washable keyboard — HP and Kensington have both had models on the market for a while — but the K310 does seem to be the first reasonably attractive, consumer-oriented washable keyboard. It goes on sale at the end of the month for $40.”

Read more of this story at Slashdot.

My keyboard is one of the first generation aluminum keyboards that Apple released in 2007, and I’ve probably had this since late 2007 or early 2008. It still works great, or it did until I spilled tea in the left shift key a week ago. I was just going to deal with the clicky stickiness of it until I saw the post about the washable keyboard above and was inspired to seek a solution. Using my superhuman searching prowess, I found this instructable on how to remove the keys and clean it. Oh happy days of typing once again!

1 June 2012 ~ Jeremy B. Blevins ~ Leave a comment
Often times I post an entry on my blog for the sole purpose of giving myself a permanent bookmark on a particular theme and this is one: The Internet meme that everybody [who is a time traveler] kills Hitler on their first trip. This one is not necessarily new to me, but I keep forgetting it when I see it. After  flipping through all the episodes of Dr. Who on Netflix and seeing one titled “Let’s Kill Hitler,”  and today’s XKCD referencing it, I am compelled.

The premise is that every time traveller, when they make their first voyage, travels back in time to kill Adolph Hitler, and thus changes the course of human history and destroying life as we know it. Usually someone else follows behind him and subverts the assassination attempt to make right the course of history.

This post is apparently one of the first references online to the meme:
http://www.abyssapexzine.com/wikihistory/

The source of the paradox, Robert Heinlein’s story By His Bootstraps, included in The Green Hills of Earth & The Menace from Earth.

7 May 2012 ~ Jeremy B. Blevins ~ Leave a comment
I’m a huge fan of the Horrible Histories videos in general, and this one is no exception: