‘Nother establishment ye certes to enjoy be callin’ to mind a few of the most daungerous bilge rats t’ever sailed the seven seas. How that ole sea dog ‘Sir’ Walter Raleigh avoided the list be uncertes.
28 August 2013 ~ Jeremy B. Blevins ~ Leave a comment
Apparently, an artist with no apparent knowledge of vexillology (or maybe he does???) has a great idea to foist a “special” flag upon the skyline of Edinburgh during The Fringe:

IT WAS billed as an attempt to unite Scotland’s capital in a collective welcome to the tens of thousands of visitors ­descending for the world’s biggest arts festival.

But a leading artist’s efforts to persuade dozens of institutions to hoist a simple white flag bearing the simple message “hello” have fallen foul of red tape and bureaucracy at three of the city’s most prominent landmarks. (The Scotsman)

I’m just a novice vexillologist, but doesn’t a white flag indicate surrender? Does the capital of  Scotland want to send that message?

23 July 2013 ~ Jeremy B. Blevins ~ Leave a comment
I spent the past month or so watching the complete series of Jeeves and Wooster on Hulu, and I proudly proclaim that my favorite character was Sir Roderick Spode, 7th Earl of Sidcup.

Nevermind the fact that the character was patterned after Sir Oswald Ernald Mosley; Lord Sidcup is an inspiration to all would-be benevolent meglomaniacs who want to make the world a better place. Unlike Bertie Wooster, that useless fop, Spode held himself with dignity and honor (except when Wooster was blackmailing him with the mere mention of “Eulalie”) and sought to restore national pride in Britain. He even almost let his civic pride and duty to nation overcome him when he nearly cast aside his place amongst the Lords to run for Parliament, only through the manipulations of Jeeves (for the benefit of Wooster)  to be pulled back to his senses.

First, his vision. He knew what he wanted and worked toward achieving it. Before his elevation to the peerage, he sought out influential friends (Sir Watkyn Bassett) and established a source of income that allowed him the freedom to think on such noble causes such as British-made bicycles and umbrellas for all citizens.

Second, his influence. The Black Shorts were devoted to the cause of Spode. They donned the uniform, attended the rallies, and even fought the Communists in defense of their great leader. Granted, their membership was mainly young unmarried men in need of a hobby, and older men whose wives determined they needed a hobby.

Finally, his determination. As evidenced in the “Eulalie” fiasco, Spode was willing to do what it took to see himself reach the success that he desired. Any man who could design women’s underwear AND lead a small army of fascists is a true man indeed.

So to all my fellow Walter Mittys out there, seeking a resolute and determined role model, let us learn from Roderick Spode and keep our heads high, even when the poo comes raining down.

28 June 2013 ~ Jeremy B. Blevins ~ Leave a comment
I was perusing one of my favorite comics today and noticed this one: 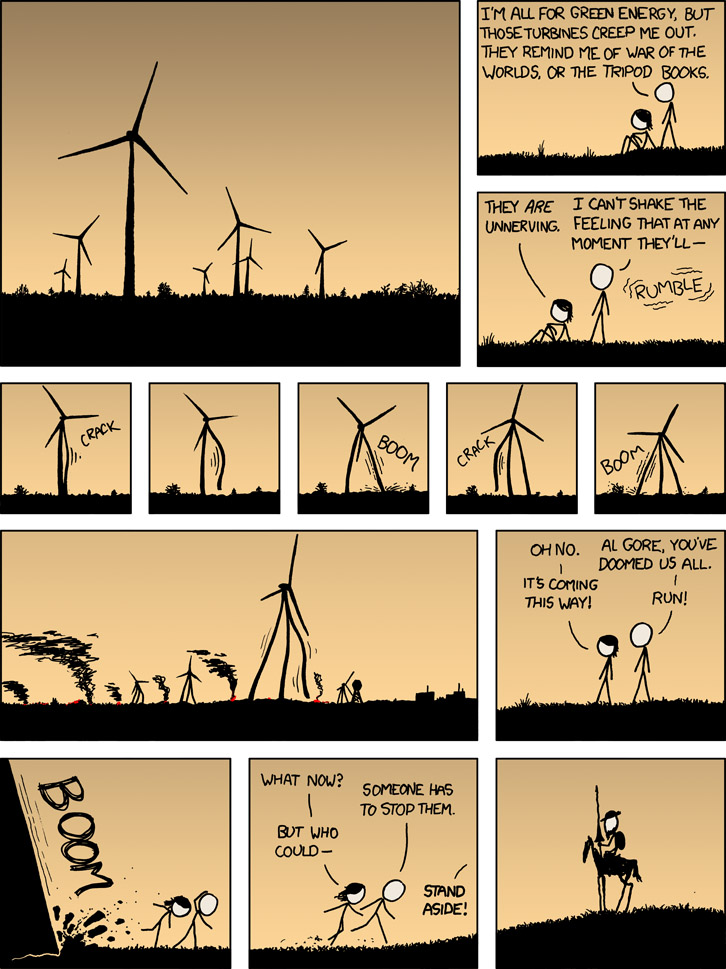 So what is the irony and the connection betwixt the two? Environmentalism’s utopia, much like Don Quixote’s Dulcinea, are fabrications. AND, the windmills are out to kill us all.

For the best comments on the story, however, click here.